I was on CNBC Asia on Sunday evening as oil prices jumped higher, discussing how the disappearance of Jamal Khashoggi was unlikely to impact energy flows between the U.S. and Saudi Arabia.

Saudi Arabia is the second largest supplier of crude to the U.S., with only Canada sending more. Even after the kingdom dialed back on flows to the U.S. last year in an attempt to draw down U.S. crude inventories (a very successful attempt, I hasten to add), we have seen U.S. imports of Saudi crude rise for four consecutive months since May of this year - coinciding with the unwinding of the OPEC production cut deal.

U.S. crude imports from Saudi Arabia reached 1.1 million barrels per day last month, a sixteen-month high.  As the chart below illustrates, aside from a wobble in late summer of last year, Motiva's Port Arthur has been a key and consistent recipient of Saudi crude.

This makes logical sense, given Motiva Enterprises is a fully-owned affiliate of Saudi Aramco. Deliveries of Saudi crude to the Port Arthur refinery, the largest in the U.S., have accounted for nearly 28 percent of Saudi barrels to the U.S. this year, up from 20 percent in 2017.

China, India, South Korea and Japan compete with the U.S. as a leading destination for Saudi crude - with Japan typically winning. But as total imports into Japan remain in check, flows from Saudi - as well as from other Persian Gulf players Iran and Iraq - have dropped on a year-over-year basis through the first nine months of the year.

Interestingly, deliveries from Saudi to China are also lower YoY, offsetting an increase to India. With sanctions set to be applied on Iran, deliveries from them to India have been considerably higher through the first nine months of the year compared to the same period in 2017, as India has been a willing buyer, particularly earlier in the year, while other customers in countries such as South Korea and France have gradually dwindled away.

But it is Iraqi flows which stand out the most: they have ticked considerably higher YoY to both China and India, favoring sending barrels to Asia over Europe. As sanctions on Iran start up in a matter of weeks, China and India's key role in the global market is going to become even more in focus.

Here is a link to Sunday's appearance. Hark, click on the below mugshot to launch to the clip: 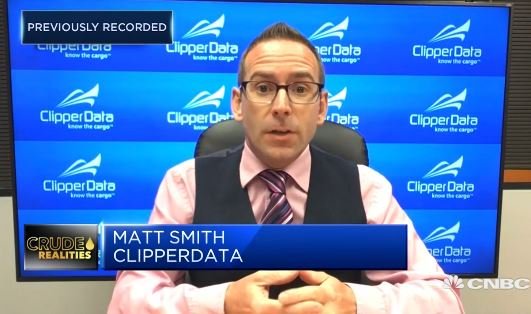