It is national forget-me-not day, something it is impossible to do with OPEC amid an onslaught of monthly oil reports. Today's bearish-tilted monthly report from the IEA is combining with a stronger dollar to send crude lower, while an OPEC meeting looms in less than three weeks. Hark, here are six things to consider in oil markets today.

1) Today we have had the IEA's monthly Oil Market Report, which has highlighted something we have been pointing furiously towards recently: relentless global supply growth. The agency said OPEC had increased production by 230,000 barrels per day last month to a record 33.83mn bpd. Our ClipperData affirm a similar monthly trend for exports:

Looking ahead, the IEA says the oil market will maintain a supply surplus next year unless OPEC makes a production cut, given that non-OPEC production is expected to grow by 500,000 bpd next year.

While we will see some attrition from some countries, this will be more than offset by growth from Brazil, Russia and Kazakhstan (hark, Kashagan). Russia is set to account for 190,000 bpd of growth, Brazil some 280,000 bpd, Canada adds 225,000 bpd and Kazakhstan increases by 160,000 bpd.

2) The predicament facing OPEC is highlighted by the chart below from today's IEA report. The cartel has historically been the balancing item in the global market, but as a result of the U.S. shale boom, it has vacated this role, choosing instead to flood the market, battle for market share, and flush out higher cost production. This has resulted in OPEC production outpacing the volume needed to meet demand for the last ten consecutive quarters:

For market balance to be restored, this ship needs to right itself, for while non-OPEC production is set to resume its rise again next year, IEA projects demand growth will remain at +1.2mn bpd. 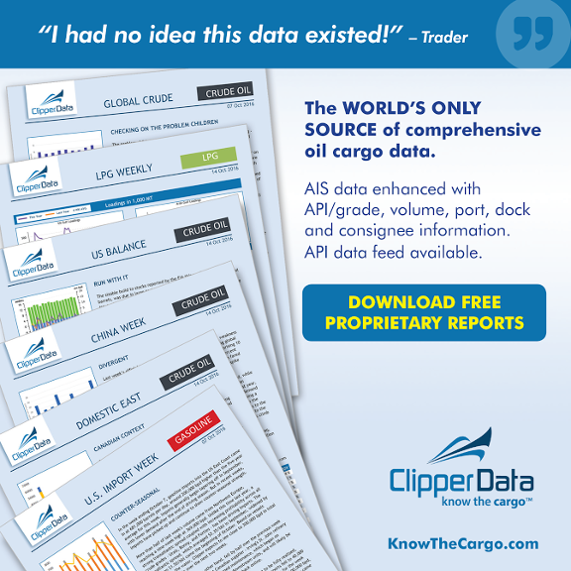 3) Yesterday's EIA report was fairly run-of-the-mill compared to recent weeks, although we saw lopsided gasoline inventory changes - in a similar fashion to those seen in the aftermath of the last Colonial pipeline outage back in September.

This time around, we saw East coast gasoline stocks drawn down by 5.4mn bbls, with a corresponding build on the Gulf coast of 3.7mn bbls (back in September, we saw the East coast drop by 8.5mn bbls, the Gulf Coast rise by 4.8mn bbls).

After recouping much of September's drawdown, East coast gasoline stocks reached a record for the time of year two weeks ago, before being hit by the second closure of Line 1 of the 1.37mn bpd Colonial pipeline in less than two months:

4) This excellent chart below is from the Financial Times (by @Ed_Crooks), highlighting how independent U.S. producers are hedging significantly more of their production compared to last year, after a year of low oil prices has left them with considerably less tolerance for risk.

The total volume of short positions held by producers - a number indicative of producer hedging - hit a five-year high last month at 608mn bbls, as they choose price certainty over potential upside.

5) As the dust settles on the U.S. election, focus shifts towards what Donald Trump will prioritize...and what he will not. Prior to the election, he said he would cancel the Paris climate agreement, which was signed by 190 countries last December.

The chart below highlights why the U.S. is integral to a global effort to cut emissions; is the second-largest emitter of greenhouse gases. Exiting the agreement is possible, but is likely to take a long time, and / or be a complex effort. A third option would be to simply ignore climate goals set under the agreement.

6) Finally, I intended to highlight this the other day, but recent shenanigans meant it got overlooked. China's import and export data for October was released this week, and continues to illustrate both sluggish domestic and global demand.